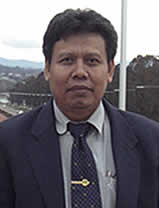 Prof. Dr. Dewa Ngurah Suprapta  obtained his Bachelor in Agriculture degree from Udayana University in Denpasar, Bali, Indonesia in 1984, after which, he served as academic staff of Udayana University in 1985 and continues to be so up to the present.  In 1992, he went to Japan to pursue his Master of Science in Agriculture at Kagoshima University. After graduating with his Master’s in 1994, he continued with his Doctor in Agriculture degree in the same University, completing it in 1997. In his studies, Dr. Suprapta specialized in Biopesticides and Plant Pathology.

Dr. Suprapta has also proven himself to be an accomplished researcher, an outstanding teacher and a prolific writer. His focus of research is on the development of biopesticides for plant diseases control where he has written more than 30 scientific publications in various international and refereed journals, most of which in the ISSAAS Journal. He also holds four patent rights involving biopesticides, granted from 2005 to 2011.

With ISSAAS, Dr. Suprapta is an active member  since 2000, and has participated in all  ISSAAS International  Congress from that time on up to the present. He served as President of ISSAAS during the period of 2010-2012 when Indonesia was the host country of the International Congress.